Not all Bathroom contractors are the same, we come across bad work, by others, every week......

Please be aware, of other "so called"  Experts of Bathroom re-vamps!
Here's some examples, to compare, their work, with ours. As soon as you enter a Bathroom...It's the detail, that always "draws the eye".

Lazy Bathroom Contractor did this!

Another Bathroom contractor, once told this client, that because the joists were running in a different direction, the heating pipes for this radiator could not go under the floor boards, or, straight back into the wall ??!!

How Underfloor pipe should look

Bad Workmanship and could be Dangerous!

And, for my final example, some other "Bathroom fitters" did a full bathroom revamp for this client.
But, when they fitted the clients shower tray with upstands... They tiled to the top of the upstand, instead of tiling over it, into the shower tray!! 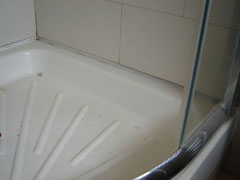 I guess they never read the manual !!

This Bathroom had been completed by the other contractors, only 2 weeks previously, and had already it had caused a leak down into the clients Kitchen below !!
The client then found HOMEWORKS and asked me to fix her problem...... because she did not want to have the other contractors, back in her house again !!
To begin with, I had to remove the Clients "new" Chrome, shower door enclosure (which, we then found out, that they had never sealed it with silicon either! ) next, we had to break out the lower line of new tiles, over the shower tray.
I removed the damaged plasterboard, that had disintegrated with the leaking water. Re-plasterboard the area again and re-tile the lower line of tiles, into the shower tray. Finally, i replaced the Chrome shower enclosure in position again.  ...... siliconed correctly, this time, of course !
The kitchen ceiling below the Bathroom, had to be re-plastered and re-decorated too !
This could of been avoided, if the bathroom was fitted correctly, from day one !!
So Please, be wary of the many, unexperienced "Jack of Alls" that are out there at the moment, all promising to do a great job for you.
Remember...A new Bathroom can only look beautiful, if it is done correctly.
Hopefully, with this website, you can view my work, as films, in the following pages, and see the difference we can make to the Bathroom & showering areas in your home.